I Didn't Start the Fire Pt 2

So who else is to blame for my love of Old Rock & Roll, or even more so, my love of DooWop. I mean after all, I’m a lifelong resident of St. Louis MO, where DooWop was not always at the forefront of Pop music back in the 50’s and early 60’s. Oh sure The Five Satins singing “In the Still of the Night” and The Del Vikings “Come Go With Me” and “Whispering Bells” were part of the tunes of the day here in St. Louis. “I Only Have Eyes for You” from The Flamingos along with The Skyliners classic “Since I Don’t Have You” are favorite songs of a folks here in St. Louis.

But there’s an awful lot of outstanding DooWop music that I just don’t recall hearing on local radio stations back then. So who do I blame for my obsession with DooWop? Well, I’d point the finger to the before-mentioned Larry Miller; for it was on his show that I would first hear The Chandellears from Kansas City and the great “Blueberry Sweet,” and “Long Tall Girl” by The Carnations; that song didn’t get a lot of airplay around here. I’d also have to point a finger at a few people who I crossed paths with right here on the Internet. I’d like to single out three people who have since passed away; I wish I had gotten the opportunity to meet all three. I did meet one of them in person. Let me explain further.

First I’d like to mention a gentleman by the name of Ron Tuskan, or as we knew him back in the days of the old AOL DooWop Diner, "RTUSKAN." Ron sent me a tape of a CD that changed me forever. The disc is Mr. Maestro’s “Memory Lane.” To this day, it remains one of my favorite CD compilations of all time. The title track “Memory Lane” came from a group I knew as The Hippies on Parkway records in 1963. I learned it was actually recorded in 1959. It was reissued on Parkway and had moderate air play in ’63 here in St. Louis. A few other songs on this CD were known to me, including “A Casual Look” from the Six Teens, “W-P-L-J” by The 4 Deuces, and The Rainbows “Mary Lee.”

However, it was the rest of the tracks on this disc that totally blew me away and left me wanting more, More, 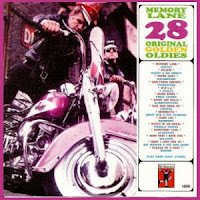 MORE! I’ll mention just a few songs: “Dance, Dance, Dance” by Scott Stevens & the Cavaliers, Baby, I Love You So” from Joe Weaver and the Don Juans, “Pledge of a Fool” from The Barons, “Now that I Found You” by The Willows, “There Goes (a Pretty Girl)” by The Enchanters, “Kiss and Make Up” by the Crowns, a group I would later learn would become The Drifters, the early 60’s version, “Something Cool” from The Academincs, “Shirley” by John Fred & the Playboy Band, and yep that’s John Fred of “Judy In Disguise with Diamonds” fame, plus two songs that simply put me in orbit: The Students “That’s How I Feel” and “Rainy Day Bells” from The Globetrotters; a song shrouded in mystery even today. I’m still not sure which story to believe about it

Ron sending me that tape, plus others I got from various folks I met through the net, left me starving for more DooWop gems.

Then there was Marsha Grant, aka "MGDOOWOP." I did get the fortune to meet this East coast DooWop queen back in 1998 when she came to visit me here in St. Louis. Marsha was another person who put me on to many, many songs, too numerous to mention.

Finally, I proudly mention Jerry Skokandich aka "Tuneman." I deeply regret never having the pleasure of meeting Jerry in person; however, we corresponded a great deal in the late 90’s and up until his untimely death. Jerry led me to discover so many great DooWop tunes I’d never heard before. He also was mainly responsible for my increased admiration of those wonderful DooWop Ballads. We’d go round and round via E-mail about ballads vs. up-tempo DooWops. I recall Jerry telling me that he once preferred the more upbeat, familiar music, and then he too discovered those more obscure ballads, and even some great up-tempo sides as well. This guy knew his stuff and was more than generous when it came to passing the knowledge along. Jerry, I know you’d be proud of me; my list of most favorite DooWop tunes is now filled with those dreamy ballads; thanks in a great part to you my friend.

Jerry turned me on to those great Relic Record survey’s that were done back in the 1990’s. Through Jerry, and a couple of other Internet friends, I was even able to hear the broadcast of the last few shows they did. That was quite enlightening for my musical education. Recently Hometown AOL shut its doors; we lost a number of great web sites when this happened. But thanks to Big Jack at the DooWop Café, Jerry’s outstanding “Rhythm and Blues Highway” is once again available. He spent a great deal of time and effort putting this site together; and I’ve been assured that is has been recreated with Jerry’s wife’s permission and is now available at http://www.doowopcafe.net/; you can find the link to the R&B Highway on the left hand side of the page. Thank you Jack.

There are so many other people whom I’d love to mention or blame for putting me on the road to this great music. I’ll drop a few more names from time to time. So again, stick around and see if I drop your name.
Posted by Jeff Mazdra at 9:46 PM