Saving the Best for First Pt. 2

We turn the old record over, if we had the old record, and get onf of the most classic album sides of all time, all crisp, clear and sounding better than we’ve ever heard it sound. I think these songs speak for themselves so I’ll talk about some of the neat parts about the side.

I must have listened to Here Comes The Sun over a thousand times in the past 40 years; now when I listen, I really hear the song. The acoustic guitar, bass, drums and that mellatron really come out. George’s vocals ring out over the music. One thing that stands out is the 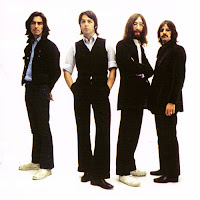 separation of the lead vocal and the background vocals. All the instrument layering is brought to life anew now.

Because and it’s multi track vocals are outstanding. As I’ve said over and over already, it all sounds so crisp and new. I love the synth flute at the end, always have loved it.

Now we get to the part of the CD where you have to take these next songs as one unit. When You Never Give Me Your Money starts, you hear a much sharper sounding guitar over Paul’s piano; then, the rest of the stuff all falls into line, as it always has. The guitar under Paul’s vocals, “Oh that magic feeling,” resonates like never before, as it does going into the last part of the song. Then the vocals fade out and we get the clear sounds of night, the clanging ship’s bell, then the crickets come in and listen for the talking. And then we get the Sun King and it’s panning guitar from left to right and Oh those Beach Boys’ like vocal harmonies.

Then Mean Mister Mustard, with the piano, tambourine, overdrive bass and vocals and then POW! Polyphene Pam blasts over the speaker. Listen for the break after the first verse and the little guitar riff that may have gone unheard before. I hear a woodblock during the guitar solo and some background chatter, probably somebody counting; I never heard that before. Then Paul takes over with She Came Into The Bathroom Window. Listen to the acoustic guitar; you might have paid attention to it before, but you will now. How ‘bout Ringo on the tom toms. Loud and clear.

Golden Slumbers sounds fabulous. When Paul’s voice cracks when he sings, “Smile awaits you when you rise,” we really hear it now. Then we Carry That Weight and it really carries through with all those sounds. I get lost in this stuff. And then, it’s The End and does it end with a bang. Ringo’s legendary drum break, and John, Paul, and George, each with their guitar solos ripping through your head as you listen, over a continuing drumbeat. Then the boys sing their famous, “And in the end, the love you take is equal to the love you make.” Maybe they did know it was the end for the Beatles as a group.

And one more thing about the new CDs is the packaging. It’s as outstanding as the discs. There’s lots of pictures and even a little video you can watch on your computer. Simply marvelous.

I recommend getting the new CDs, especially if you’re a die-hard Beatles fan.
Posted by Jeff Mazdra at 7:59 AM