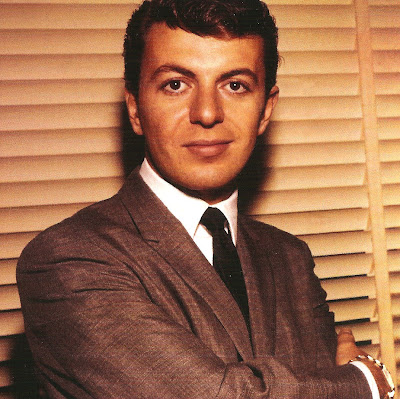 In 1963, Columbia issued “Ruby Baby,” Dion’s first single on their label. So Laurie was left with enough sides to continue issuing singles for some time after Dion’s departure. However, as you will note, they would run out of solo material, perhaps passing on a few album tracks that might have made good singles.

Disc Two begins with a song taken from Dion’s “Lovers Who Wander” LP and issued as a single in the Spring of 1963. “Sandy” would peak at #21 after “Ruby Baby” charted in January of ’63. This track sounds just fine in MONO. It again carries on with that full, warm sound that was on Disc One. Again, the blend of Dion and The Del-Satins is smooth and sounds just like it did back then on my old 45. Now if you flipped this record over, you get a song called “Faith,” which actually goes back the the Dion & the Belmonts days; but it still has a good sound quality.

In June of ’63, Laurie would dip into the “Lovers Who Wander” album for the next single. “Come Go With Me,” a remake of the Del Vikings hit, peaked at #48; the record was backed with “King Without a Queen,” which did not hit the charts; maybe Laurie should have pushed the B-side.  “Come Go With Me” has a premature fade out in the last verse. This reminded me of “Darling Loraine” by The Knockouts which also faded in the last verse. Both sides sound excellent on this CD, especially “King Without a Queen,” blending Dion’s lead with the excellent backing vocals of The Del-Satins, along with some fine guitar and a subtle organ in the mix.

Next came a single taken from the “Runaround Sue” LP. I believe if “Lonely World” would have been issued as an A-side a year earlier, it would have charted much higher than it did in ’63, when it bubbled under the Hot 100 at #101. The sound on this song is as good as it gets and once again The Del-Satins vocals are loud and clear. The flip side of this 45 was another one from the Dion & the Belmonts days. “Tag Along” was recorded early in their time at Laurie and for some reason, it did not appear on a single until the group had broken up and Dion himself had left Laurie.

In 1964, Laurie released two sides from Dion’s first solo album entitled “Alone With Dion,” which was recorded in 1960. “After the Dance” failed to chart as did the B-side, “Then I’ll Be Tired of You.” These songs sounded good but they were obviously released in an effort to try and continue to cash in on Dion’s continuing success on Columbia, which I must admit was failing in 1964. But that’s an issue for another time.

Laurie would again dip into the tracks off of the “Lovers Who Wander” LP for one more single, Dion’s version of “Shout.” This sounds very good in MONO; while I was listening to the track, I got the feeling they took the best parts from The Isley Brothers 1959 original and mixed in a lot of the raw energy from the Joey Dee & the Starliters 1962 live recording.

Another note about Dion on Laurie in 1964. Laurie would re release “Little Girl” as a single but it would not do any significant chart action.

One last single was issued in 1965 when Laurie would go all the way back to the “Presenting Dion & the Belmonts” LP and put out a song called “I Got the Blues” which would fail to hit the charts. In 1958, this vocal put to the rhythm of Bill Doggets “Honky Tonk,” might have actually seen some chart action. In 1965, a year after the British Invasion, Motown and all the other changes, the song stood no chance of becoming a hit. However, it’s on the collection for us to enjoy, and I might add it sounds as good if not better than the versions I have on a couple of Ace CD’s, which are well known for great sound quality.

In Part Four, I’ll take a look at the singles from 1968 and 1969 when Dion would return to Laurie before he would end up on Warner Brothers.
Posted by Jeff Mazdra at 4:19 PM

Labels: CDs, Dion, Dion and the Belmonts, Motown, Music, Rock and Roll, The 60s, The Beatles, The British Invasion

"Tag Along" happened while the Belmonts and Dion were still at Mohawk Records, before Laurie Records came to be, and separately. The Mohawk single was considered a Dion vehicle as a solo performer, noting the Belmonts providing backing vocals. This pre-dated their unification as a dedicated group.