Part One, The First Few Singles: 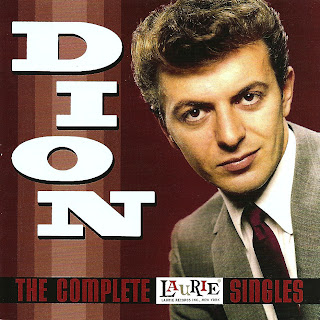 When I first learned about the release of this 36 track 2 CD set, I got excited for one major reason; the songs were being re mastered from the original MONO source tapes. Of course I was also excited to finally be able to add a few missing tracks to my vast collection of Dion recordings on CD.

I’m going to break this review up into four parts. The reason should become obvious as we go along. First let’s talk about the packaging. This 2 disc set comes with extensive liner notes, so extensive I have yet to fully read them. The track listing is extensive and informative as well, including writing credits, record catalog number, highest chart position and year of release. I even enjoyed the CD labels, which resemble the colorful Laurie 45 label with it’s red, white, black and gray decoration. Everyone who owned copies of these songs knows what I’m talking about.

The first eight tracks on Disc 1 deal with Dion’s first solo singles after he split with the Belmonts in 1960. These first songs pre date Dion’s relationship with The Del-Satins, which I’ll talk about In greater detail in parts 2 and 3 of this review.

A few thoughts about the overall sound quality of these two discs; the words WOW, OUTSTANDING, FULL and WARM come to mind. As I listened to all the tracks, I couldn’t help but think that the people who put this set together have managed to cross a threshold in digital sound. The songs have a full, rich sound. It reminds me of listening to the old 45’s on my brother’s Curtis Mathis stereo, the one I was forbidden to touch in my younger days. Many people have complained about the sound of digital music on CD as being too cold, or even mechanical. These songs are NOT like that. One of the first things that went through my mind while I listening to these songs was how about doing this with Dion’s Columbia singles too.

Disc One begins with “Lonely Teenager,” which was released in late 1960 and received a lot of airplay. I actually recall hearing the flip side of this 45 first. “Little Miss Blue” is track 2, which barely cracked the Hot 100 back in 1960. On the CD, you can hear the background vocals much better than the STEREO versions that have been previously issued. The acoustic guitar sounds warm, the way an acoustic guitar should sound. In fairness to the excellent quality of the recordings Dion did at Laurie, I  point out that the overall sound of the Dion catalog in STEREO is really not that bad. It’s just that over time, I’ve become more interested in hearing these songs as I did when I was young, and that was hearing them in MONO. 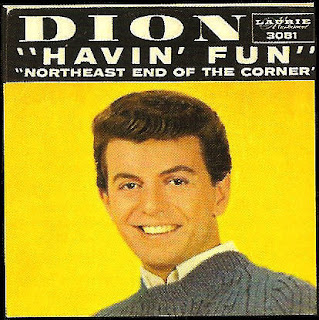 The next single, “Havin’ Fun,” is one of those songs you never hear on the Oldies radio. It’s a nice song that continues that warm sound I spoke of earlier. The trombone solo sounds darn good. The B-side of this record is “Northeast End of the Corner;” it sounds good however it takes Dion toward the Pop sound that Bobby Darin would take, you know it sounds like something you might have heard at the Copa back then.

The next single, “Kissin’ Game” sounds like a track that could have easily been a Drifters’ record. It sounds good on the CD. The flip of this one, “Heaven Help Me,” reminds me a lot of a song that Don and Phil Everly might have recorded. Both of the A-sides of these 45’s did chart on the Hot 100.

“Somebody Nobody Wants” did not crack the Hot 100; it just missed. The significance of this record is the return of the girl group back up like Dion’s first solo efforts. The vocals sound good, clear and well balanced in their MONO versions. “Could Somebody Take My Place Tonight” is the B-side of this 45. Dion sounds great on the lead of this side. This was one of the songs I was not too familiar with before I got this collection.

I call these first eight songs the beginnings of Dion’s solo Laurie singles. They all are great to hear. The next two parts of this review concern the heart of this collection, the recordings Dion did with The Del-Satins.
Posted by Jeff Mazdra at 3:57 PM