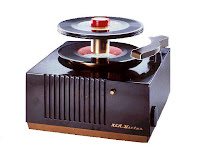 I was talking the other day about the record players we had back in the day. My buddy reminded me that record companies made record players under their name. What more likely happened is a few companies made the players and put more familiar names on the outside of the outfit. Even Lionel made record players in the early 60's. Here's a picture of an RCA 45 only record player from the 50's. The guts of the machine look very much like the Decca record player my family had. Of course, after a while we had to put a bottle opener on the tone arm in order to play the records without scratching them. Sure wish I still had the old Decca.
Decca also made guitars back in the 50's.
Posted by Jeff Mazdra at 12:19 PM